As Congress works to pass a government funding package for fiscal year 2020, Senators are looking to add legislation that would extend tax benefits for businesses. Specifically, they are considering extending around 30 expiring or expired tax breaks for businesses, as well as creating new permanent tax breaks. If Congress is to provide additional support to businesses through the tax code, it is critical that this legislation also includes tax supports for lower-income families in need.

Today, Prosperity Now released an updated policy brief, Enhancing Tax Credits for Working Families, which explores how Congress can strengthen the Earned Income Tax Credit (EITC) and Child Tax Credit (CTC). These two tax credits boost the incomes of low- and moderate-income working families, lifting millions of people out of poverty each year. That said, the EITC and CTC have gaps that need to be addressed so they can effectively support the most vulnerable households.

To encourage Congress to eliminate these barriers, the Tax Alliance for Economic Mobility, a coalition chaired by Prosperity Now, recently submitted a letter to the House and Senate tax committees asking that improvements to the EITC and CTC be included in year-end tax legislation. As detailed in our policy brief, there are several issues that policymakers should address:

Fortunately, there are several steps Congress can take to make the tax credits more effective. The bipartisan Refund to Rainy Day Savings Act (S. 1018 and H.R. 2112), introduced by Sens. Cory Booker (D-NJ), Tom Cotton (R-AR), Doug Jones (D-AL) and Todd Young (R-IN), as well as Reps. Bonnie Watson Coleman (D-NJ-12) and French Hill (R-AR-2), leverages tax refunds like the EITC to help families save for emergencies. The bill would allow tax filers to defer 20% of their tax refund which would accumulate interest for six months before being returned to the filer. This way, a family would have savings to fall back on throughout the year, instead of just at tax time. 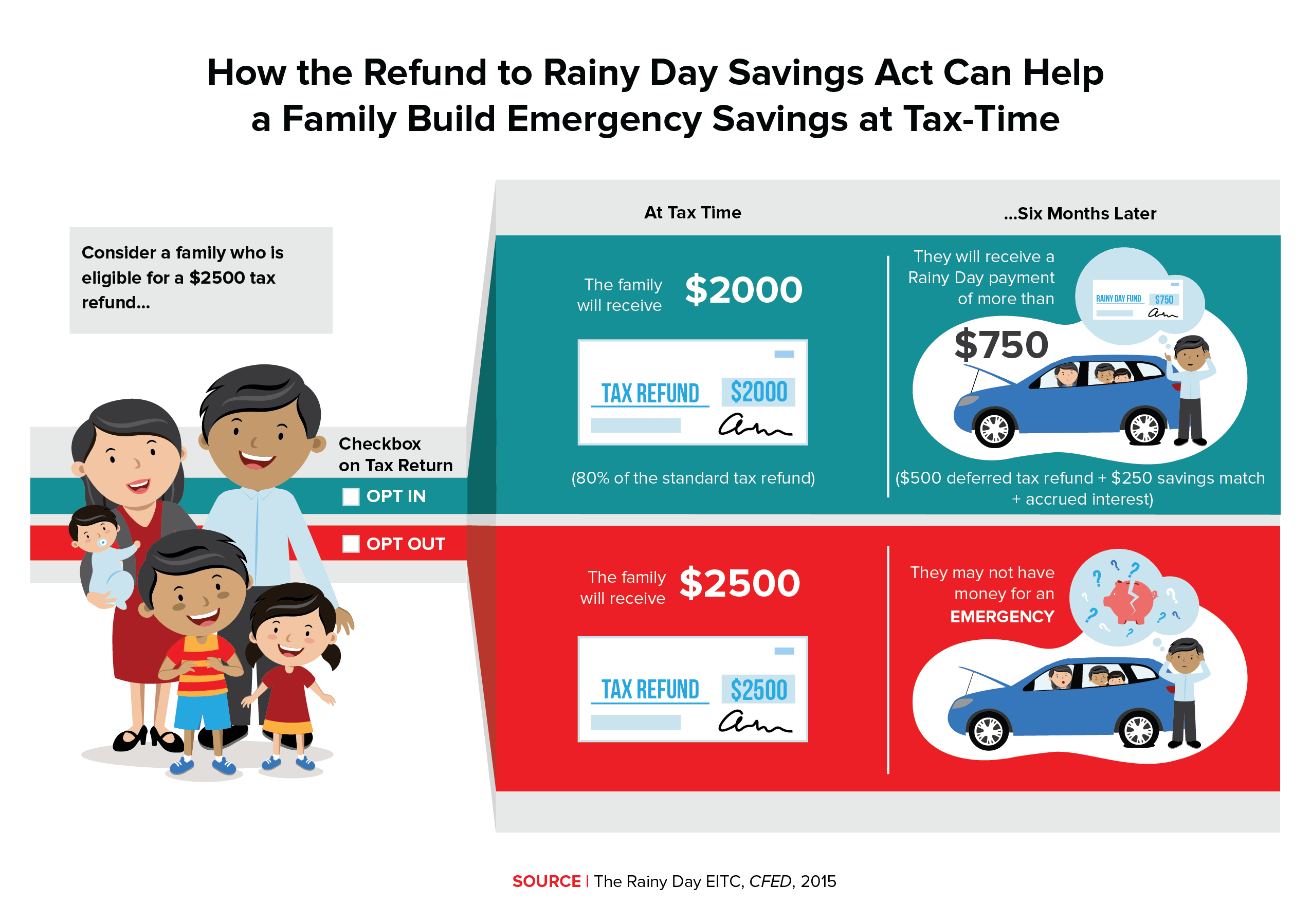 The Volunteer Income Tax Assistance (VITA) program provides free, accurate tax preparation assistance to low- and moderate-income households, helping them access tax credits like the EITC and CTC. VITA's volunteer tax preparers are held to a high standard and the program has a 98% return preparation accuracy rate, the highest in the industry. There is a growing demand for VITA's services, meaning that the program requires more resources to effectively serve those in need. Increasing VITA's federal funding to $30 million would expand the capacity of existing VITA sites and allow new ones to open, helping more working families claim the tax credits they are entitled to.

Finally, the Working Families Tax Relief Act (S. 1138 and H.R. 3157), introduced by Sens. Sherrod Brown (D-OH), Michael Bennet (D-CO), Dick Durbin (D-IL) and Ron Wyden (D-OR), as well as Reps. Dan Kildee (D-MI-5) and Dwight Evans (D-PA-3), would expand tax credits for working families. The bill would raise the maximum EITC for childless workers, expand the eligibility age range and increase the maximum credit for families with children. The Working Families Tax Relief Act would also improve the CTC by making it fully refundable and establishing an additional credit for families with young children. In addition, the legislation would improve access to these credits for families in Puerto Rico, which has more stringent eligibility requirements than states on the mainland. Lastly, the Working Families Tax Relief Act would allow the IRS to regulate paid tax preparers, which could help mitigate the issues of inaccuracy and predatory behavior on the part of these preparers.

Learn more about how these proposals can help working families access the EITC and CTC by reading our policy brief. Congress needs to prioritize strengthening these tax credits for low- and moderate-income families, rather than only providing additional benefits to businesses. Contact your Senators today and urge them to include tax supports for lower-income households in their end-of-year tax legislation. With your support, we can help direct the benefits in the tax code to those who need them most.

HUGE NEWS: Thanks to You, VITA Has Become Law!

Wow—it’s finally happened. The Volunteer Income Tax Assistance (VITA) program has become law! As a result of the tireless work...

Protect the Federal EITC and the Child Tax Credit

In 2013, 1,012,292 households in Illinois claimed the federal EITC. According to new data released by the [Brookings Institution](http://www.brookings.edu/research/interactives/eitc), 867,541...

Prosperity Now worked with a number of our partners to develop a new proposal: the Rainy Day EITC.