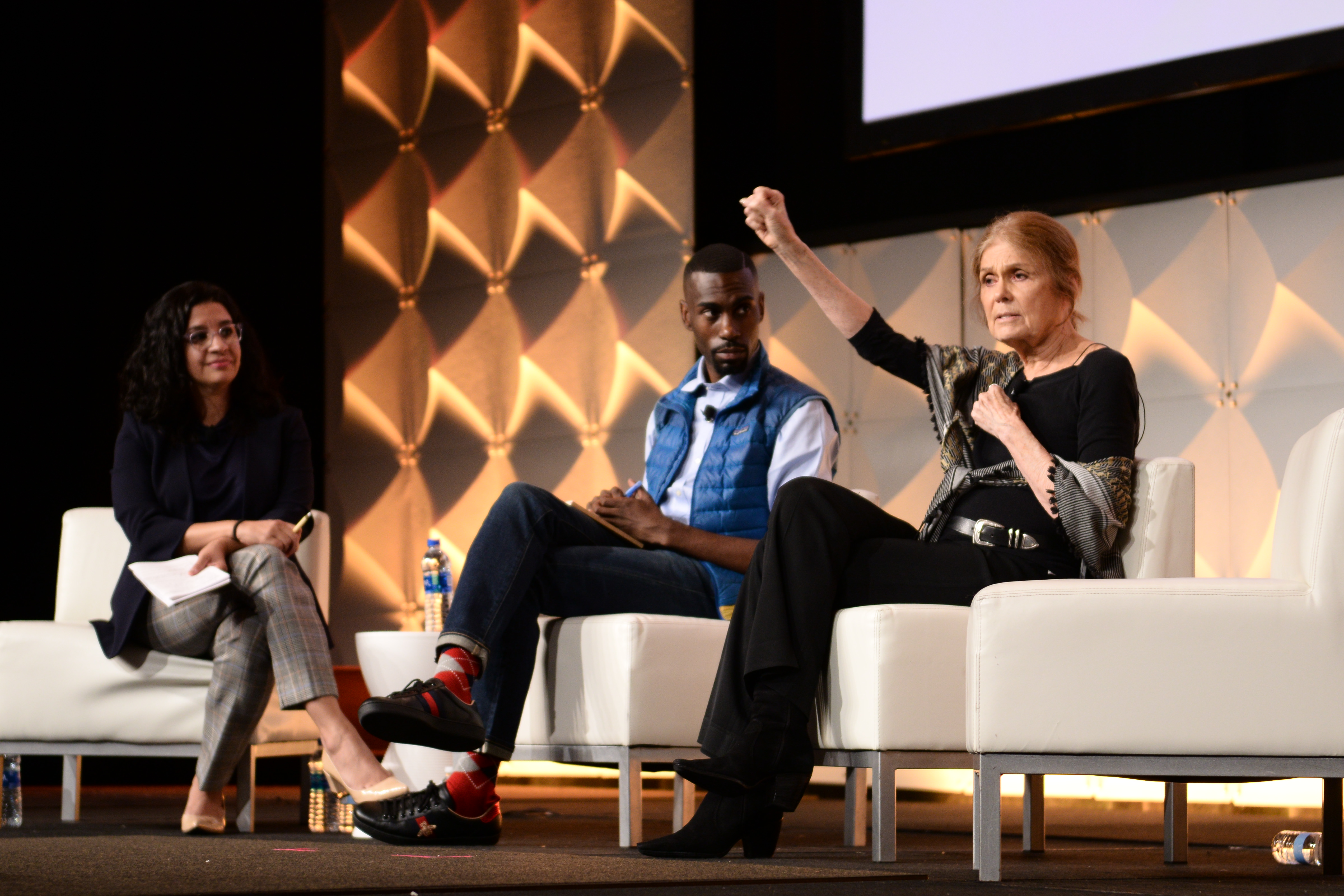 A common thread in all matters concerning the asset-building field—whether its tax policy, racial equity, homeownership, savings, consumer protections and financial capability among others—is advocacy: How do we build a movement for change around the issues we care about?

This was a major topic of discussion at the Prosperity Summit, which culminated in a plenary that featured two generation-defining advocates: Gloria Steinem, longtime activist, writer and feminist organizer, and DeRay Mckesson, activist, trailblazer of the Black Lives Matter movement and host of the podcast, Pod Save America.

Taking questions from Tanzina Vega, host of WNYC’s The Takeaway, Steinem and Mckesson reflected on what it takes to grow movements and achieve genuine progress.

Here are some of the lessons they shared (you can also listen to the conversation at The Takeaway):

To better serve people who have faced injustice, we need to empathize with what they go through. Gloria Steinem argued that, to do this effectively, we need all five senses to be present when interacting with people. That means we need to make time to step away from our screens, which Americans look at for 11 hours each day, because we can’t bridge an empathy gap by staying indoors and being isolated.

DeRay Mckesson added that “gaps”, such as the “wealth gap”, are indicative of an imagination gap. People often assume that low-wealth communities suffer from intractable problems that we simply don’t have interventions for. He argued that this lack of imagination perpetuates the wealth gap because we haven’t thought hard enough to devise innovative solutions specific to people with low wealth.

When asked why, despite her decades of activism, so many people haven’t changed their attitudes, Steinem pointed to a key barrier: the power structure. She said the ideas that prevent progress—such as constructs of race and gender, and a dishonest look at America’s history of slavery and Native American obliteration—are still deeply embedded in America’s consciousness. Until more people undo these structures, they won’t understand why we have inequity today.

Mckesson pointed out that well-intentioned programs, despite the good work they do, have a limited impact in the face of failing structures. In fact, he said, programs exist because the structures failed in the first place. While innovative, helpful programs should be pursued, he emphasized that we can’t let systems off the hook.

Should we tear down harmful systems or reform them from within? Steinem noted that this is a false dichotomy. Change, she said, should be pursued by any means necessary, and our attention should be focused on what we can do today and tomorrow to get us closer to where we need to be.

While Mckesson felt that the desire to “burn it all down” has emotional appeal, he noted that, “When we burn it down, we don’t start from the Garden of Eden, we start from the ashes. Some people will get hurt in the ashes.”

Mckesson concluded that because people made up these systems in the first place, we can create something different. Because we can design something better, we have reason for hope.

Bringing Everybody to the Choir

Mckesson used an apt metaphor to describe what a movement is—a choir. He said that it’s important that our choir is inclusive and as big as it can possibly be, which means we need to work hard to make it appeal to others and be open to anyone who wants to join.

“Part of our work is to sing the best song so that people join the choir, and there are literally so many people who just want the invitation,” he said.

Can we bring people from across the ideological aisle to our choir? To do this, Mckesson said, it’s important to make your points relatable and give others the space to come into their own understanding.

For example, to explain intersectionality to someone who couldn’t wrap his head around it, Mckesson asked him the last time he felt unsafe in his body. As a black, straight man, he responded that he felt most unsafe around the police. Mckesson contrasted that with his own experience as a black, gay man, in which there are multiple situations unrelated to the police that make him feel unsafe based on who he is. When multiple identities create danger, Mckesson said, intersectionality is playing out in the body.

This helped the other man understand how other people experience oppression in ways that he never had to think about before.

For Gloria Steinem, the source of despair in activism is pre-occupation with the question, “what should I do?” Rather, she said, we should get up every morning and identify what we can do.

“I’m going to reach out to anyone who needs me at the moment and take it from the bottom up instead of the top down,” she said. This is how the momentum for advocacy is sustained.

Mckesson emphasized three points that are important to keeping activism alive. The first is to remind yourself that people you are reaching out to can take the movement forward even without your presence. They already had everything they need; your role is to help them cultivate that long after you’re gone.

Second, he said, you need to take your truth wherever you go, regardless of who you are dealing with. Embrace the inevitable tension that comes with speaking your truth, and keep the door open for people who understand your truth.

Finally, know you have more power than you think. When McKesson used to manage staffing at a school system, he said that just one email from a parent led to a drastic change in staffing. That parent believed her voice mattered, and a simple action led to a big impact.

Steinem described herself as a “hopeaholic, because hope is a form of planning.” In the face of constant uncertainty of what the future holds, she said, hope give us the strength to proceed toward it with a vision of something you can do this day and the next. She was also hopeful because she can remember a time when things were worse than they are today.

Mckesson said he found hope in being part of a community of people ready to engage in the world. For him, it means that rather than live in somebody’s shadow, he can live in their glow.

“I think that’s the best ever we can do with each other,” he said.

Learn more about the Prosperity Summit, and save the date for our next Summit in 2020!

Lessons for Successful Advocacy We Learned at the Prosperity Summit

The Prosperity Summit was not just a conference for learning, but for doing as well. Hundreds of attendees packed buses...

How Will Wealth Affect the Midterm Results? Find out With Our Scorecard.

It’s election week, and as expected, many Americans are sitting on the edges of their seats awaiting the results. As...

6 Ways You Can Use the Prosperity Now Scorecard for Advocacy

To help you maximize the potential of the Scorecard as a powerful advocacy tool, we’re thrilled to offer these six ideas.

Advocacy Doesn't Have to Be Scary

Effective advocacy is not linear and does not follow a one-size-fits-all formula.