How the U.S. Tax Code Drives Inequality—and What We Can Do to Fix It

Editor's Note: This post was originally published on FordFoundation.org on April, 13, 2017.

What do millions of people who occupied Wall Street, felt the "Bern," wore pink hats with pointy ears, and donned baseball caps with the slogan "Make America Great Again" have in common? They are all concerned about wealth inequality.

Today, the top 1% of Americans has more than half the nation's wealth. The wealth gap is especially wide for people of color: the wealthiest 400 Americans own more wealth than the entire Black population and a third of all Latinos combined.

If you want to understand why the rich are getting richer and the rest of us are barely getting by, look no further than the US tax code. In 2015, Congress spent $660 billion on tax benefits for homeownership, education, healthcare, retirement savings and income. This is more than the combined budgets of all US Cabinet agencies, excluding the Department of Defense. Unfortunately, this sum is disproportionately distributed to those who need help the least: the top 1% of all US household received more in federal spending than the bottom 80% combined.

For example, in 2015, the federal government spent $39 billion more on mortgage interest and property tax benefits than on rental assistance programs like Section 8 housing vouchers and Homeless Assistance Grants. In other words, the government is spending a lot of money—$141 billion—on housing, but most of it goes to wealthy people through the current tax code, rather than to those struggling to pay their rent through public programs. 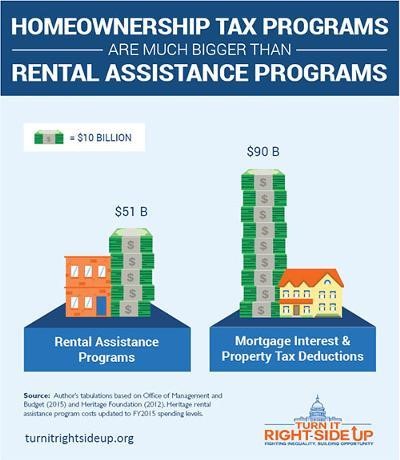 The system is upside down. So how did we get here?

There are two major reasons that our tax code is so upside down: one structural and one political. First, the use of itemized benefits in our tax code disadvantages low-income taxpayers. Itemizing benefits lowers a person's tax liability—or what they owe to the government in taxes—but the items that can be deducted almost always only apply to higher-income taxpayers. For example, a low-income taxpayer is more likely to rent their home than own it, excluding them from homeownership tax benefits, while a person who owns several homes is allowed to collect the benefit for each home—significantly lowering their tax liability.

The second reason is that most Americans don't understand how the tax code works, and don't have high-priced lobbyists to protect their interests. When low-income taxpayers don't know exactly how the tax code is working against them, they aren't equipped to advocate to their representatives for a fairer system. That means representatives only hear about tax issues from their wealthy constituents or from corporations looking for more benefits.

When we start to understand how much money the government spends on tax benefits, it becomes clear that there is no difference between receiving a housing voucher or food stamps and getting a tax benefit that lowers your tax liability—yet the government is spending more on benefits for wealthy families than on programs to help working families struggling to get by. As a country, we have the money we need to help many more families build wealth. It's up to us to direct it more efficiently and effectively.

A better system would benefit all taxpayers.

This April, instead of thinking about taxes as a chore to check off your list, think about how fair tax spending could help all communities achieve the American dream. By making changes to the existing tax benefits aimed at wealthy households and expanding affordable homeownership programs, more families could achieve the dream of owning their own home. With a more robust Children's Savings Account program, more students could get to and through college without crushing student loan debt. By removing barriers that prevent low-income workers from building flexible savings, more low- and moderate-wage workers could accumulate the savings necessary to weather life's unexpected storms without turning to predatory and financially crippling debt. And with access to simple retirement account platforms and stronger consumer protections, more people could save for a comfortable retirement after a lifetime of hard work.

The tax code should help build an inclusive economy where all Americans can get ahead. If you think a more balanced tax code is common sense, learn more about Prosperity Now's Turn it Right Side Up Campaign.

As Congress works to pass a government funding package for fiscal year 2020, Senators are looking to add legislation that...

The Tax Code Favors Wealth Over Work. Several in Congress Want to Change That

According to the Pew Research Center, more than a 150 million Americans are part of the U.S. workforce. That’s about...

Pulling Back the Curtain: An Inside Look at Capitol Hill Advocacy

To the average American, the image of Capitol Hill implies exclusivity. The impression that the Hill is an exclusive club...