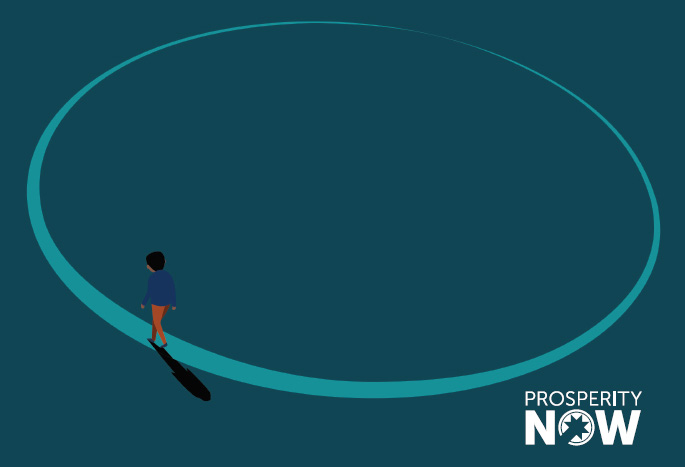 Fifty years ago, following an investigation into the causes of a series of tumultuous summers of civil unrest and race riots in the mid-1960s, President Johnson’s National Advisory Commission on Civil Disorders (better known as the Kerner Commission) concluded that the nation was “moving toward two societies, one black, one white -- separate and unequal.” While a whole host of present-day inequities embody the Kerner Commission’s stark prediction, Prosperity Now's latest study confirms that if nothing is done to bridge the racial wealth divide, we face the prospect of permanently remaining on the same ill-fated path the Commission warned of five decades ago.

Today, as a follow up to our previous Ever-Growing Gap and Road to Zero Wealth reports, we’re releasing Running in Place: Why the Racial Wealth Divide Keeps Black and Latino Families from Achieving Economic Security, which highlights how the wealth of median Black, Latino and White families has changed over the past three years and what those shifts mean for the racial wealth divide today and into the future. As we demonstrated in last September’s Road to Zero Wealth, the change in Black and Latino household wealth between 1983-2013 left those communities, at the median, face-to-face with the prospect that their household wealth could hit zero within our lifetimes.

Among our most significant findings is that if racial wealth inequality follows the trends of the last three decades, this divide will never come close to being bridged—even as the aggregate population of people of color heads toward surpassing that of the White population. Just as jarring, even if we were on a path to bridge the racial wealth divide, it would still take median Latino and Black families a respective 94 and 242 years of wealth-building at the levels they’ve experienced between 2013-2016 just to catch up to the wealth that median White households own today.

As troubling as these and other statistics in Running in Place may be, we must not forget that the racial wealth divide was built through a series of policy and societal choices made over generations and centuries—and we can change it by making better choices about investments and public policies that boost, rather than block, the ability of communities of color to build wealth. Whether through a national Children’s Savings Account program that provides a substantial nest egg for each child born in the country or a program that helps families achieve homeownership, policies like these should be intentionally designed to level the wealth-building playing field, providing greatest support to those with the lowest means to build wealth.

Even if we were on a path to bridge the racial wealth divide, it would still take median Latino and Black families a respective 94 and 242 years of wealth-building at the levels they’ve experienced between 2013-2016 just to catch up to the wealth that median White households own today.

We also need more evidence on how current policies and programs create barriers for low-wealth communities to improve their economic circumstances. To that end, we continue to call for a government-wide audit of federal policies and programs that not only documents how the government is affecting the racial wealth divide, but also offers solutions. Further, we call on Congress to protect and expand (rather than do the opposite, as the recent Senate-passed S.2155 would) the collection and dissemination of public data that allows organizations like Prosperity Now, local governments, advocates and others to identify racial discrimination in lending, housing and more.

This may feel like an insurmountable challenge. But we must remember on the words that followed the Kerner Commission’s famous warning, countering that “this deepening racial division is not inevitable. The movement apart can be reversed. Choice is still possible. Our principal task is to define that choice and to press for a national resolution.” And so, the question stands before us: Do we have the will to make the choices necessary to tackle the racial wealth divide before it’s cemented as an unavoidable reality of American life?

Collaboration is Key for Nonprofits in Dallas

This year, Prosperity Now’s Racial Wealth Divide Initiative team is hosting a series of roundtable events as part of our...