Last week, members of the House Ways and Means Committee—which is responsible for crafting tax legislation in the House of Representatives—passed H.R.1, the Tax Cuts and Jobs Act. Coming at the tail end of a year of legislative fits and starts—filled with more fits than starts—the Committee’s passage of H.R. 1 represents another dangerous and rushed attempt by some in Congress to legislate with no public input whatsoever or regard for the economic impact their legislative priorities might cause. Beyond this, it’s another blatant attempt to leverage what some might perceive as the collective will of the many—the poor, the working- and middle-class—to pass seemingly populist legislation that ultimately would overwhelmingly benefit the wealthy and elite.

Despite the rhetoric that this bill would benefit the middle-class, recently released non-partisan analysis by the Tax Policy Center (TPC) shows the opposite to be true as the clear majority of its benefits flow to the top 1%. 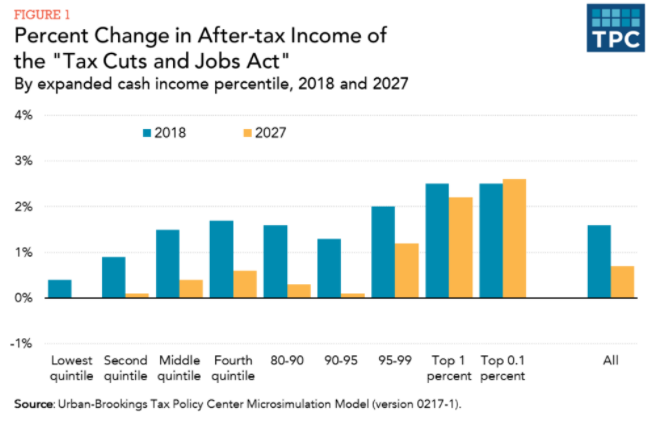 While the graph above is straightforward, there are a few points that might go unnoticed at quick glance. The first, as you can see below, is that in 2018 the top 1% gets the same share of tax cuts from the Tax Cuts and Jobs Act as the bottom 60% of Americans, which includes those in the middle-class. The second point that might go unnoticed—and the one that is more likely to be omitted in talking points in support of the bill—is just how much the top 1% stands to gain from this legislation in the long-term. By 2027, their share of tax cuts more than doubles, surpassing the cuts that the entire bottom 80% of Americans, including the middle-class, would get. 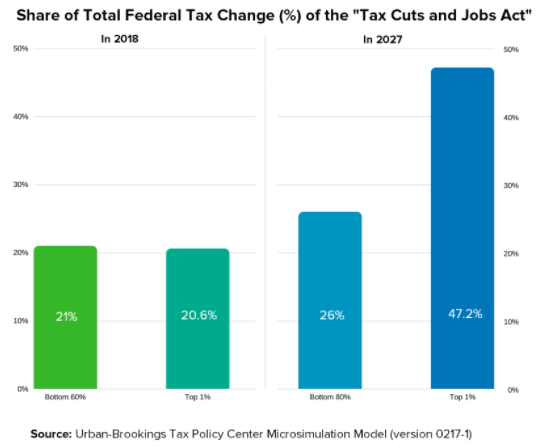 When it comes to the dollar benefits of this tax plan, the benefits that the top would get vastly dwarf what those in the middle-class and our most vulnerable would. On top of that, as the years go by the cuts for these families shrink, all while the cuts for the richest families go up. Put differently, over the next ten years the middle-class, along with the poorest 1/5 of Americans, end up getting a tax hike rather than a cut. 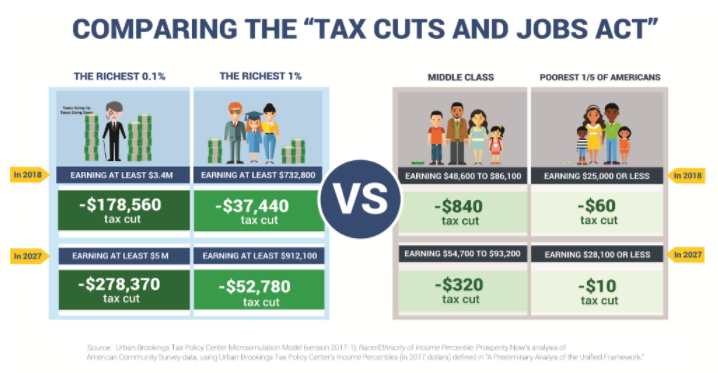 In addition to helping those at the top keep more of their money, the Tax Cuts and Jobs Act would also make racial wealth divide worse than it already is as the bill would disproportionately benefit White households, leaving low-wealth communities of color (and low-wealth White households) even further behind. While non-Hispanic Whites account for about 62% of the nation’s population, they make up about 80% of those in the richest 1% and .01%. By comparison, African Americans and Latinos—which account for more than 30% of the population—make up just 3.2% and 4.7% of those in the top 1%. At the other end of the income spectrum the opposite of this dynamic is true as Black and Latino households are overrepresented among the poorest 1/5 of Americans. 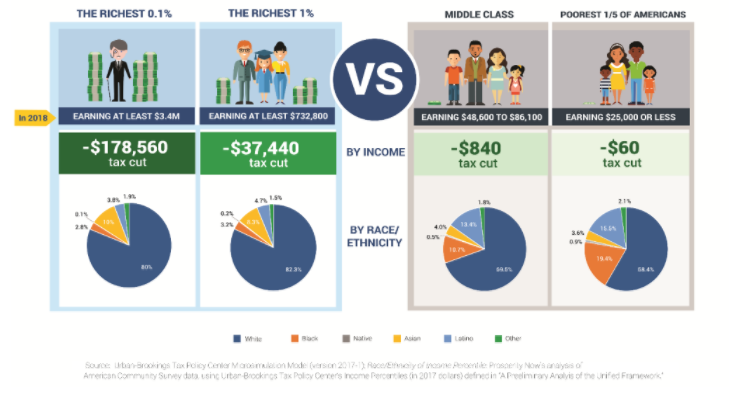 While it’s clear to many that the Tax Cuts and Jobs Act is ultimately calling for tax cuts for millionaires and billionaires to paid by the middle-class and the most venerable among us—including through massive cuts to many social programs that the tax plan would force by adding $1.5 trillion to the deficit—there’s something else at play here that shouldn’t be ignored. That is, that this legislation (along with the Senate’s own take on tax reform) represents another attempt to create a massive transfer of wealth from those at the bottom to those at top, just as was the case with efforts to repeal the Affordable Care Act.

For Black and Latino households—and communities of color more broadly—this is a reality many can’t afford as today each community owns just $4,000 and $6,000 in respective wealth, which is a fraction of the $140,000 in wealth owned by White households today. Given the fact that data over the past thirty years paints a future in which median Black and Latino households could find themselves on a path to zero wealth within our lifetimes, the Tax Cuts and Jobs Act would only serve to accelerate the racial wealth divide. Rather than siphoning what little wealth most families have and giving it to those who have more than enough wealth already, Congress should work to propose tax policies that are fair and equitable, and that provides the most wealth-building support to those who need it most.

Turning Adversity into Opportunity: How We Can Advance Economic Justice Today

Tax Day is once again upon us and for most of us it’s a chance to look back at the...

$729 billion. That’s how much the federal government spent through the tax code last year to help families build wealth....