Race, Wealth and Taxes: How the Tax Cuts and Jobs Act Supercharges the Racial Wealth Divide

Using the Institute on Taxation and Economic Policy’s (ITEP) microsimulation model, which generates tax estimates for a sample of representative taxpayer records, Race, Wealth and Taxes: How the Tax Cuts and Jobs Act Supercharges the Racial Wealth Divide provides the first quantitative analysis to examine the racial implications of the Tax Cuts and Jobs Act and how these tax cuts reward existing White wealth at the expense of the economic security of households of color, poor households and a stalling middle class.

Last year, Congress had a tremendous opportunity with the Tax Cuts and Jobs Act (TCJA) to help low-income and middle-class families—particularly those of color—build the wealth needed to secure their share of the American Dream. Unfortunately, by spending the majority of the $1.9 trillion within this law to provide large tax breaks for the wealthy and multi-billion-dollar corporations, Congress chose to actively invest in policies that exacerbate economic inequality rather than mitigate it.

Even worse, in designing and enacting the 2017 tax law, Congress not only chose to grow the economic gap between rich and everyone else, but also between White households and households of color, thus further perpetuating a long history of systemic racism that undergirds government policies and American society at large.

A newly released report by Prosperity Now and the Institution on Taxation and Economic Policy, Race, Wealth and Taxes: How the Tax Cuts and Jobs Act Supercharges the Racial Wealth Divide, finds that the TCJA not only adds unnecessary fuel to the growing problem of overall economic inequality, but also supercharges an already massive racial wealth divide to an alarming extent.

Using ITEP’s microsimulation model, which generates tax estimates for a sample of representative taxpayer records, this study provides the first quantitative analysis to examine the racial implications of the TCJA and how these tax cuts reward existing White wealth at the expense of the economic security of households of color, poor households and a stalling middle class.

Key findings from Race, Wealth and Taxes include:

Families that are not among our nation’s highest-income households are likely to be hit twice by the Tax Cuts and Jobs Act. In the short term, higher deficits brought about by the tax change will likely increase pressure on lawmakers to cut funding for important programs and services that help reduce barriers to opportunity for so many low- and moderate-income households – particularly those of color – in areas like health, income security, job training and education. In the long term, this dynamic will not only exacerbate already tense economic insecurities so many households face today, but will also lead to even further economic hardships for households of color.

Ultimately, the debt-financing of the federal budget not covered by these cuts could lead to deficit and spending impacts that dwarf the distributional impacts that are highlighted throughout Race, Wealth and Taxes. Given the country’s ongoing demographic shift from a majority-White to a majority-minority population, the effects of this double squeeze from the tax law and budget cuts would not only disproportionately harm communities of color, but it would also have vast consequences for the national economy. 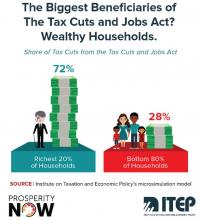 This report examines data from the Federal Reserve System’s 2016 Survey of Consumer Finances to understand how median Black, Latino and White wealth have changed in the past several years.

The Road to Zero Wealth

In this report, we examine Federal Reserve data over a 30-year period (1983-2013) to understand the growing racial wealth divide facing Black and Latino households at the median.

This primer is a companion resource to a state policy “blueprint” which recommends select policies with the potential to address growing racial wealth and economic inequality.